Remaining in the 72,000sqm of what once was Lancaster Park lies the last of the rubble, and truck-loads of memories. 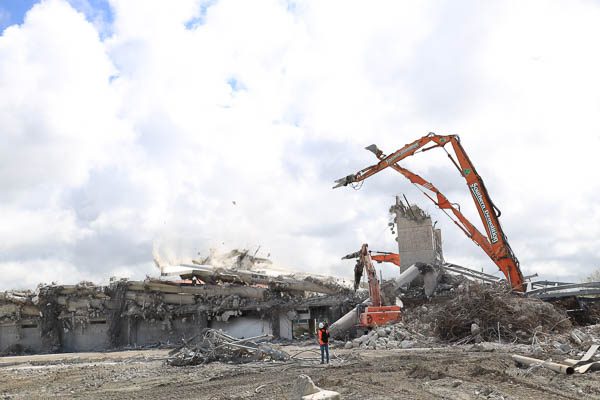 Christchurch City Council’s Project Director Lee Butcher says it was overwhelming to see the public queue at the gates for a glimpse of the icon being striped to its bones and brought to the ground.

A new community sports park has been council-approved, with design and construction commencing towards the end of 2020.

A staggering 65,000 tonnes of concrete from the two main stadiums alone has been removed. “We’re on track for our goal of two percent un-recyclable material, and we’re under our budget of $12 million,” Lee says.

For those who worked on the project, it wasn’t just a job, but one respected for its history and what it meant for the people. “As the biggest deconstruction in New Zealand, none of us have anything like this on our CVs, and likely won’t again!”

“Especially with earthquake-damaged buildings there were no guarantees of how anything was going to go. The huge roof with beams of 48 metres long was taken off separately, required months of planning, lots of signs offs, and removal of countless brackets and bolts.

“It’s quite surreal to come to the finale.”

Many of us have spent much of the past few weeks staring at rugby fields as the World Cup rolls on.

Put two of these fields side by side and you’ve got an area similar to that covered by the Metro Sports Facility, which we currently have under construction.

We’re now into the thick of the foundation concrete pours on the site that will support the nine indoor courts and the competition, diving and leisure pools.

In total, the project will require around 16,000m3 of concrete and 3700 tonnes of structural steel to build. That’s only slightly less than our other major project, Te Pae, which everyone can clearly see is a substantial central city building.

Once all the foundations are poured for the Metro Sports Facility, people travelling along Moorhouse Avenue and St Asaph Street will start seeing the structural steel going up early next year.

We know that thousands of people will visit, and dozens of events will be held at the Metro Sports Facility each year once the doors are open, providing an economic boost for the city. But it’s worth remembering the build itself is also doing that, with over 300 people expected to be working on the site at the height of construction.

That’s a big team, doing an important job, but I appreciate it’s not the main sporting fixture we’re all focused on at the moment.

One of the most exciting projects for the city right now is the Metro Sports Facility and it’s really ramping up, with the first major concrete pour for the site carried out recently.

Ōtākaro have poured around 1100m3 of concrete for the foundations of the site. This is the first of around a half a dozen large concrete pours that will create the foundation for the largest sport and recreation venue of its kind in New Zealand. It was great to see to a procession of around 200 truckloads of concrete arriving on site.

The Metro Sports Facility will cover an area about the size of two rugby fields and require around 16,000m3 of concrete and 3700 tonnes of structural steel to build, making it one of the largest projects in central Christchurch.

Once all of the foundations are poured, people travelling along Moorhouse Avenue and St Asaph Street will start seeing the structural steel going up early next year. This is just another of the visible signs of increased momentum in the recovery, with the opening of wonderful new projects like the city library.

This is also great news for the local economy. Over 300 people are expected to be working on the Metro Sports Facility at the height of construction, so it will be a hive of activity before the doors even open to sport and recreation enthusiasts. That’s 300 people with good, high-paying jobs, not to mention the economic boost to the central city once the project is complete.

No sooner had we started construction on the Metro Sports Facility that the questions started coming in about car parking.

It’s great that people are so excited about the facility, so let’s take this opportunity to look at what lies outside of the building.

A significant portion of the site is being made available for parking. There will be around 550 car parks for people visiting and working at the Metro Sports Facility. By comparison, the similarly large Melbourne Sports and Aquatic Centre has 459 spaces for visitor use.

Access to the Metro Sports Facility car park will be managed by the Christchurch City Council, as the owner of the facility.

The Metro Sports Facility’s location on Moorhouse Ave will also assist with parking as a lot of the businesses in the streets to the south operate during standard working hours. This means there will be additional on-street parking available in the area in the evenings and weekends; the facility’s busiest times.

Of course, a car won’t be your only option. The Metro Sports Facility sits on the major St Asaph Street and Antigua Street cycle routes.

We want this to be a facility for people of all abilities, ages and stages, and the accessibility of the location is integral to that.

Recently I had the real pleasure of breaking ground at last on the construction site for the new Metro Sports Facility.

Along with Mayor Lianne Dalziel and Minister for Sport and Recreation Grant Robertson, we turned the sod on the construction of the new indoor 50-metre competition pool and dive well. Canterbury’s swimmers have waited a long time for access to a competition class pool and all of Christchurch has been looking forward to this wonderful new facility.

The five-metre-deep dive well and competition pool tanks are stainless steel and will come from a specialist supplier in Italy. These tanks have been selected as they will be more resilient than traditional pools in the event of any further earthquakes.

An active community is a healthy and happy community and with everything from five hydroslides to throwing cages for our high-performance athletes, the Metro Sports Facility will offer something to people of all ages and stages. The Metro Sports Facility will bring thousands of people into the central city each week, it’ll provide world class recreational facilities for our people, and it’ll boost our local sporting codes.

Working together, the council, the Government and the local sporting codes have got this project back on track after it was stalled and over budget. Now, we’re seeing the results of that work. This will be a fantastic facility for Christchurch and seeing construction begin is just another marker of the renewed progress we are delivering for Canterbury.