Honda Cars Christchurch has been part of the Christchurch inner city landscape for over three decades. Residing in the same place on the corner of Montreal and St Asaph Street, shifting only once across the road briefly after the 2011 earthquake, has been New Zealand’s biggest volume Honda dealer. 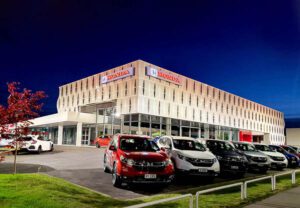 The showroom was given a 12-month overhaul by Calder Stewart Construction in conjunction with Lonsdale Architecture, and this year has received top honours at the 2020 New Zealand Commercial Project Awards.

The Gold Award-winning showroom is very much a case of ‘the same, but different’. In other words, the layout is the same as it always has been, but that is where the similarities end.

The aim of the project was to retain all the familiarity of the old showroom but with added modern design touches and compliance with the latest earthquake standards, rather than simply demolishing the existing showroom and starting from scratch. This also meant the team of sales staff, mechanics, parts and technicians could still feel at home as before.

As the dealership faces north, it was logical to let as much light in as possible. The large glass windows allow for this, leaving Civics, HRVs and Type Rs basking in the glow of the day. From the outside, the first thing you notice is the outer façade stretching from end-to-end on the top half of the showroom.

From a distance, it reflects a modern and forward-thinking facility. However, look closer and you notice it is full of Honda heritage.

Each waving panel is made up entirely of retro-inspired emblems. Inside, customers have access to the café and waiting area; the perfect place to unwind while your Jazz or Civic Type R is getting the works in the servicing department. Talking of service, the company still retains the highest level of customer service satisfaction.

With plenty of parking on site and a modern and inviting award-winning showroom built to the highest possible standards. this business is here to stay.