“It was hard to let go of a business that I set up and nurtured over twenty-five years.” 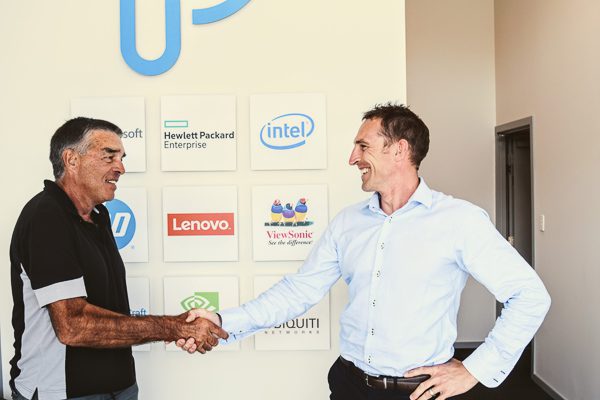 Graeme Walcott speaks from the heart. He founded Paragon Computers in the mid-1990s and built it up from a one-man enterprise to become a trusted IT support company specialising in looking after the IT requirements of customers across a wide range of industries. Graeme has now decided it is time for him to retire and to leave the company’s future growth in the hands of his partner of ten years – Riki Browning.

Graeme will be filling his future days, not with internet systems, VoIP services and Cloud Migration, but also with family, golf, travelling and spending time at his holiday home on the West Coast.  “I began my own computing company at just the right time. It was when IBM PC compatible computers were becoming affordable and available to small businesses. I had completed a computer programming course while working in the UK – back in the days of huge mainframes and punch cards being fed into the machines. That was all to change dramatically with the introduction of the PC.”

At first, Graeme’s focus with Paragon Computers was on building home and business computer systems and selling PCs – the 286, the 386 and the 486 – very familiar numbers to people who developed their computers skills on those early Intel processors.  “Over the years we have supplied most Canterbury high schools with computers. At one stage we supplied an order for 140 PCs from Cashmere High School and Burnside High was another major client, but businesses are our main market.”

Competition soon became fierce in the PC market, with large appliance stores being able to supply cut cost computers. That challenged Graeme to expand and evolve the services offered by Paragon into IT support which is the emphasis of the company today.  “We now have a team of eight highly trained technicians who can provide a tailor-made solution that’s exactly right for a business. Our people have accounted for our success in still being around after twenty-five years and over that time we have fostered great working relationships with our customers. I am very proud of what we have achieved in such a challenging and competitive industry. Other companies that started out simply selling computers and then didn’t diversify have disappeared. We are still here.”

Riki Browning, now the sole owner of Paragon Computers, says the company is in good shape thanks very much to Graeme’s innovative approach and committed customer service. “We have some very loyal customers and I intend to both cement Graeme’s legacy and further develop the company. I am sure Graeme will always be interested in what we do. After all it was his baby in the beginning.”