A $2 million government cash injection to upgrade the Hagley Sports Centre will cater for a wide range of sporting codes, and likely be named after cricket legend, Sir Richard Hadlee. 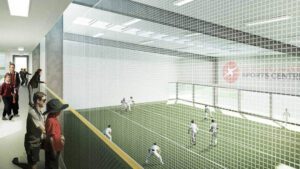 The public can now provide comments to the council on the proposed multi-use sports centre to replace the current Hagley Sports Centre (formerly known as the Horticultural Hall) in South Hagley Park.

The funding is part of a government commitment ahead of the ICC Women’s Cricket World Cup 2022. The Canterbury Cricket Trust – which held the lease over the park site since 2017 – plans to use the proposed replacement building for the current building’s original recreation use.

While it will be primarily for cricket training, the trust intends to accommodate more community sports like netball, basketball, hockey and futsal training and playing.

The centre facilities are in addition to proposed new changing rooms in North Hagley Park.