He spent two years stacking supermarket shelves to pay his bills while working 12 hour days as a fledgling real estate agent. Now, he’s in the top one percent of Harcourts’ global performers. Metropol catches up with Harcourts Grenadier’s Jonny Nicholls about what it takes to get to the top – before you even turn 30. 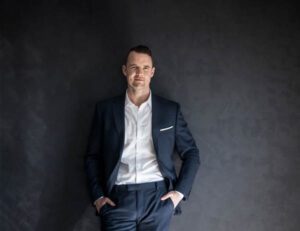 But just five years ago, as a fresh University of Canterbury Bachelor of Arts graduate, Jonny initially fancied a career in sports journalism or property valuation.

That was until a conversation with the only real estate agent he knew set him on his current path, and he successfully applied for a job at Harcourts Grenadier City Office.

The only problem was – he had to make sales to earn commission.

“I followed advice to tap into my network of homeowners, but at the time I only knew four; my brother, my sister and two of the coaches at my rugby club – and none of them wanted to buy or sell.

“I worked out that I needed $350 a week to pay all my bills, so I took a job at Coca-Cola and would go into supermarkets from 4am to 7am to get that covered.”

After his failed bid to tap into this network, he decided he needed to focus on growing one instead.

“From 7am to 7pm six or seven days a week I would prospect. I set myself a goal of 100 calls per day, so would go through the phone book and try and convince people to buy or sell their house through me.”

It took two years for him to earn enough to leave Coca-Cola, three years to start seeing impressive results, and four years to make it into the top one percent of Harcourt’s 7000 real estate agents across seven countries – including 2000 New Zealand wide.

He is also now a shareholder of the Harcourts Grenadier City Office – making him one of the brand’s youngest shareholders in New Zealand – and heads a team of four, the Nicholls Group.

“I wanted to join Harcourts because it was the biggest real estate company in Christchurch, so I thought I may as well try and join the biggest and the best.

“I also liked that there was opportunity for growth in the company, you could be an agent or move up into management.”

It is this growth which motivates Jonny each day.

“I love the growth and being able to measure myself against how other people in the business are doing.”

But how does a twenty something stay compelled to work six or – more often than not – seven days a week?

“A lot of it comes down to personal stuff – your health, your friends, your relationships – you have to nurture all those areas outside of work to do better in your career.

“And I love now that when I go to work I have to be a better person to grow my career.”

Jonny says an added bonus of the job is the opportunity to deal with a wide range of people every day.

“I always had an interest in property and people, and there was the added drawcard of the opportunity to work hard and be rewarded quickly – and I didn’t know any other jobs where I could do that.

“Everyone is interested in property – they have something to say about it, or want to learn more about it, so you can go anywhere and talk to anyone about it, it’s a great way to meet new people.”

Jonny says he has also relished the opportunity to dismantle a somewhat cynical view of real estate agents as untrustworthy, or just after a sale.

“The industry does have a bit of stigma, so you have to work hard to build your reputation. I have tried to build a reputation that’s probably based on a) working like a dog, and b) telling it like it is.

“Now, 70 to 80 percent of my work is repeat or referral based, and I think that largely is down to me being trustworthy and telling it like it is – I think we’re a winning business because of it.”

So, what happens when you reach your career goal before you’re 30?

“We set new goals and go again, that’s the beauty of this role. The growth is unlimited and that’s what drives me more than anything, to keep serving our clients and go again. Being number one nationally by the time I’m 35 wouldn’t hurt, either.”