In a play, there is always so much anticipation for the third act. Act one, we get to know the story and the characters; act two, the plot thickens; and with act three there is usually a triumphant finale. Such is the case with the Volkswagen Touareg, which has just evolved into its third generation. 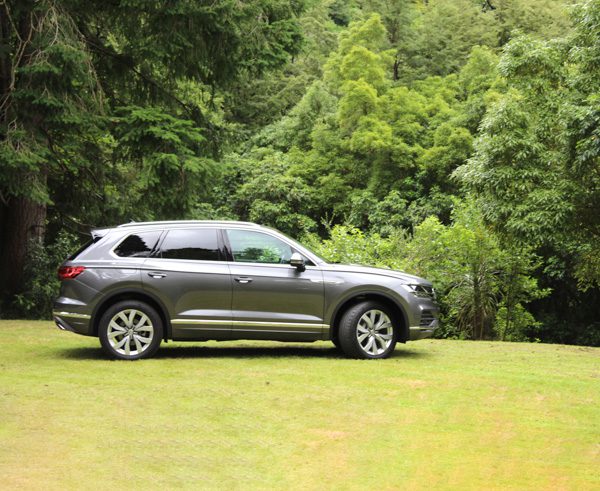 In the past, the Touareg has been in the shadow of the Audi Q7 and Porsche Cayenne, despite Volkswagen owning both Audi and Porsche. With the new Touareg, Volkswagen has upped its game and it shows. I had the new model on test for a week and can safely say the new car is the best yet.

Make no bones about it, the new Touareg is the flagship of Volkswagen’s fleet. Prices start at $92,990 for the entry point V6 and finish at $107,990 for the V6S. Both models come with a new 3.0-litre V6 TDi engine with 170kW/500Nm (V6) and 210kW/600Nm (V6S) respectively. A new eight-speed DSG box puts that grunt to all four wheels via a new torque-splitting centre differential, which can distribute 70 percent of drive to the front and 80 to the rear.

Climb inside and straight away you’ll be captivated by the massive 15 touch screen on the centre console. The Discover Premium infotainment system is in charge of the car’s interior functions, leaving buttons to a minimum. While the usual tech of Nav, heated and air conditioned leather seats are always welcome, it’s the option of night vision which is really cool, allowing you to see on a screen potential hazards from hundreds of metres away.

Interior quality is first rate and head and legroom, front and rear, is most capacious, as is the boot. The Touareg also weighs in at 1995kg and can still tow an impressive 3.5 tonnes. Moving off and above 2,000rpm, that 600Nm kicks in and you are pulled forward rather quicker than expected. Power delivery is effortless, smooth and lively for a big luxury SUV. Despite being in comfort mode, the ride can be still quite firm in places, so it’s probably best to leave it in normal. In sport mode, the Touareg squats down and proves itself to be more than capable of eating up bendy bitumen.

Leaving the tarmac and selecting off-road mode, the Touareg is surprisingly capable. Fiddling with the off-road settings and you bound along with a great degree of pomp and circumstance. My test car came with the $6,000 option of air suspension, allowing you to lower or raise the car from the flick of a switch; handy for devouring gravel and muddy roads.

The biggest surprise was just how fuel efficient the Touraeg is. At 6.9l/100km, for a big V6 bruiser, that’s epic. In summary, if you are in the market for a luxury SUV, you would be hard pressed to overlook the new Touareg.