STANDING IN REMARKABLE RECOGNITION OF THE ARCHITECTURAL AND ENGINEERING MAGNIFICENCE TAKING PLACE AT GROUND LEVEL IN CHRISTCHURCH, IS THE BRAIDED RIVER EFFECT OF TE PAE CHRISTCHURCH CONVENTION CENTRE’S FACADE. 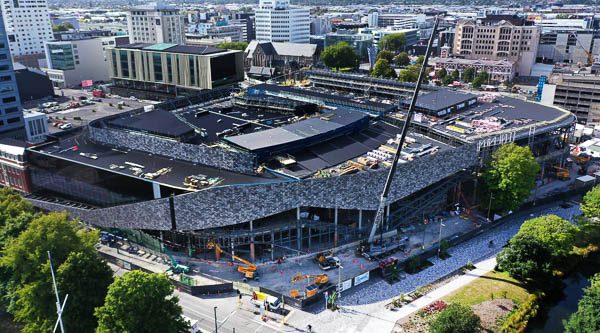 CPB Contractors has now installed a quarter of the 43,000 herringbone tiles that will make up the design and Ōtākaro Limited Chief Executive John Bridgman says achieving this iconic look has been a significant feat of architecture and engineering.

“Each of the fibre cement tiles is placed individually on a panel in a layout that creates the look of a braided Canterbury river.

But colour is only one part of the equation, with a complex curved steel structure to support the 1604 panels required to deliver the full effect,” he says.

“This prime central city location was chosen for Te Pae Christchurch because it’s on the doorstep of some of the best dining, shopping and accommodation Christchurch has to offer. It also ensured we did all we could to deliver a facility befitting this prominent riverside site and the significant buildings surrounding it.”

“The design is for a fluid and undulating facade that responds to the cultural narrative of the local iwi and the Avon River flowing through the city.”

Advising on Ngāi Tūāhuriri/Ngāi Tahu values and narratives, the Matapopore Charitable Trust was fully embedded in the design process, which Mendes said refined and reinforced the ‘braided rivers’ concept which started as an early idea.

“Principles of the unique Canterbury landscape are captured in the materiality. There are five varied tones of grey and different surface textures in the facade composition,” Bruno said.
“The panel colours build on the interplay of shades and the characteristics of a ‘living surface’.”

Matapopore Chairperson, Aroha Reriti-Crofts, says the concept for the facade is aligned with ki uta ki tai (from the mountains to the sea).

“The term relates to the the movement of water through the landscape and the numerous interactions it may have on its journey.

This concept also has a strong connection with both mahinga kai and whakapapa, which are two of the kaupapa that are being embedded into the Anchor Projects.”

The facade cladding is in fibre cement tiles, which are produced using mineral base materials.

The tiles will last for more than 50 years and are fully recyclable. Fibre cement production has 90 percent less greenhouse potential than aluminium sheeting.