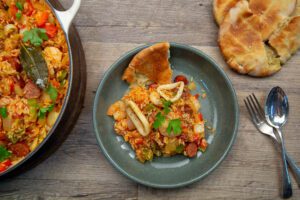 Add the onions and cook until softened. Add celery, green and red capsicums and garlic. Cook for another five minutes, stirring occasionally.

Add rice, turmeric, cayenne, and bay leaf and stir continuously for one minute. Add the ½ cup wine, tomatoes and chicken stock. Increase heat to high and bring the liquid to a boil. Reduce to low heat, cover, and simmer for 10 minutes.

Turn off the heat, keep the lid on to let everything rest for five minutes.

Fluff the jambalaya with a fork, garnish with parsley and serve with toasted garlic bread.