New research has revealed that the Great Ocean Road in Australia is the most beautiful road trip route in the world according to Instagram data. Others at the top of people’s bucket lists include Big Sur in California, and the United Arab Emirates’ Jebel Hafeet. 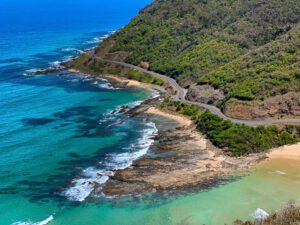 Many people are still wary of international travel and staycations are continuing to rise, however travellers can tick off their bucket lists without leaving the comfort of their car.

Researchers anaylsed more than seven million Instagram hashtags associated with the world’s most popular road trip destinations, calculating how many Instagram pictures are shared per kilometre of the journey; the country with the most Instagram posts per mile being crowned the most picturesque in the world.

The results reveal that Australia’s Great Ocean Road (pictured) is considered the most beautiful road trip route in the world; covering 253km of road in the ‘land down under,’ with an impressive 1,321,570 hashtagged images of it on Instagram. That equates to nearly 5224 photographs per kilometre.

Stretching alongside the south-eastern coast of Australia between the cities of Torquay and Allansford, the beautiful route was constructed in 1932 and has continued to be one of the most popular tourist excursions in Australia.