The arrival of fresh green asparagus is a sure sign of summer, and those locally grown at Gray’s Produce also come with a royal tick of approval. 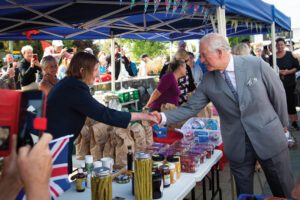 Christopher and Jenny Gray have been growing the nutritious, flavoursome stalks on their Motukarara farm, just off the Christchurch Akaroa Road, since 2003.

Their strict attention to quality control not only sees the produce featured at Canterbury’s top restaurants like 27 Steps and Otahuna lodge – but it also caught the eye of none other than Prince Charles and Camilla on their 2019 New Zealand tour.

While perusing the stalls at the Lincoln Farmers and Craft Market, The Duchess of Cornwall stopped to speak with Jenny, and asked to purchase a jar of preserved asparagus.

Unfortunately for the Duchess, the produce was display-only.

It had just been jarred for display, and not packed under food safety regulations, so couldn’t be given away. But the Duchess was very interested in what the couple do.

And for good reason. Gray’s Produce has high grade sodium-rich soil which Christopher and Jenny humbly credit for their succulent spears, as well as tomatoes and potatoes.

The delicacies are snapped up at local farmers’ markets in Lincoln, Lyttelton and Opawa, and also feature in local vegetable delivery boxes, too.