For 2021, the Highlander has been refreshed for the fourth time, with a recent launch in Auckland and Paihia to show what’s new.
The new Highlander is being built at Toyota’s US plant in Indiana, and New Zealand and Australia are the only right-hand-drive markets getting it. Styling wise, with its wide grill and wing-like spindle, it does have a whiff of “the land of the free”.

The range starts at Toyota’s Driveaway Price of $60,990 for the entry level GXL 3.5L V6 Petrol and finishes at $74,990 for the high end 2.5L four-cylinder Limited ZR Hybrid. Two variants of the petrol are on offer, but Toyota is championing the three GXL, Limited and Limited ZR Hybrid options to spearhead its sales.

Longer by 60mm and 5mm wider, it also weighs 75kg less than the previous generation. The interior is well laid out, with all the switchgear for the infotainment system being very intuitive. It comes with a plethora of standard kit including LED headlights, rain sensing wipers, hill start assist, parking sensors all around, reversing camera, blind spot monitoring, keyless entry with push button start, and Apple CarPlay/Android Auto. 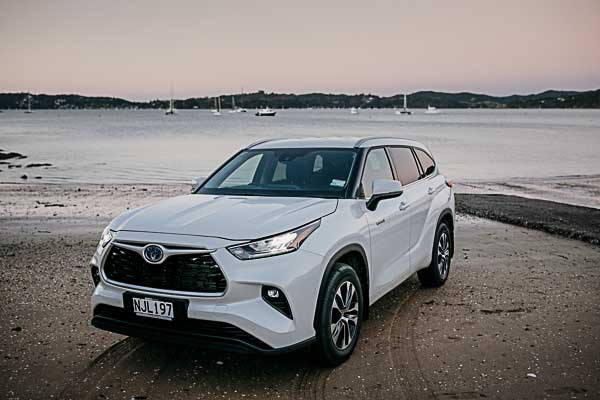 Our drive started at Emirates Team New Zealand HQ on Auckland’s Viaduct and we made our way north to Paihia. The Hybrid was certainly frugal on the juice, however it felt distinctly softer in the corners despite the torque delivery of petrol and electric power being linear and responsive. By contrast, both the GXL and Limited petrol models felt sportier in the corners, but you don’t get the same level of straight-line grunt.

Then again, as we made our way from Paihia to the amazing sight of 2000-year-old kauri tree, Tane Mahuta, the Highlander showed it was never about devouring bendy bitumen, but more about being a comfortable and solid performer on a long trip, which it managed quite well.

As far as first impressions go, the latest Highlander, thanks to the levels of kit and the inclusion of Hybrid could very well tip the segment in favour of Toyota. I’m looking forward to testing it out on Canterbury roads soon.