The ugly food movement – this decade’s term to describe fruit and vegetables of the knotted, gnarly and spotty kind –is taking over our soils. 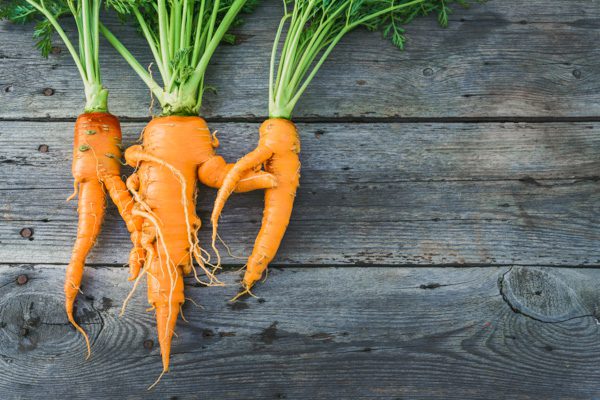 Although an unflattering title, ugly food is a new food group we can include in our shopping baskets. People are saving on pennies whilst simultaneously saving the world food-shortage and wastage problem. As a growing trend, with those like Jamie Oliver spreading the word, this is really just a reversal back to the good old days.

In decades passed, a child’s image of an apple included a worm peeping out the side. Now it’s more likely the Apple logo. Cut out the codling moth, peel away the brown patch and pop that puny cast-off into the lunchbox. Take a large perfectly spherical Californian orange for instance and a local, small organic blemished one. Cut both into quarters and compare. It’s likely the later surpasses in intense juicy flavour.

Every year reportedly 2.9 trillion pounds of food gets dumped, according the Food and Agricultural Organisation of the United Nations – ‘ugly food’ is a big part of the problem. The EU, until recently, imposed rules on the length, size and condition of what fruits and vegetables retailers could sell. Big is not necessarily beautiful, but the food industry has been conditioning our eyes over our taste buds. New Zealand produce, such as kiwifruit, sells overseas as voluptuous clones in a row – for an arguably brazen price-tag. The tasty small fuzzy ones left behind, can sell for a song.

However, times ‘they are a changing’. It’s been a couple of years since Countdown introduced The Odd Bunch – asymmetrical avocados, odd-ball kumaras, hail-stone pocked stone fruit, or apples that would not otherwise make the grade. Until wild and interesting becomes the new normal, they sport a cheaper price tag – a great way to save money.  In many remote parts of the world, living off the land correlates to longevity. Food in its heirloom ancient form is unrecognisable to many of our purposely bred next-gen varieties and those pumped with chemicals to increase shelf-life and aesthetic value.

Thankfully, in many a home vege garden in New Zealand, it’s often taste before beauty. It is at the retail stores where we often have our aesthetic-appeal radars out. Carrots spring to mind in the funny deformity stakes – the Frankensteins of the vege world. The tangled multi-limbed vegetable has simply just struck a pebble or stick while growing, then branched out to save itself. Capsicums come a close second in hilarious, but harmless, renditions. Strawberries and tomatoes can split or fuse together or sprout extra ‘bits’.

Share your comical food photos on Instagram, support farmers’ markets and ask for their more aesthetically challenged items, grow your own and shop for what’s on the inside – not the outside. There is in fact a fruit called Ugly Fruit, which interestingly has exotic-food status. This bulbous oddity is a hybridised Jamaican grapefruit, tangelo and orange mix.

It might be a while until we see Master Chef: the ugly edition, or warty root vegetables in Michelin Star dishes – but watch this space.