A new and novel sport is taking off in Christchurch’s red zone. Drone racing – where competitors navigate the remote-controlled flying devices through a series of obstacles at speeds of up to 160km/h – is drawing crowds to the land left vacant after the Canterbury earthquakes. 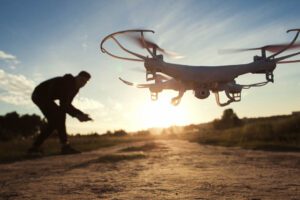 Racing drones are custom-built and contain small cameras that feed data to goggles worn by racers – enabling them to steer their drone through a series of gates and poles with flags.

“The track is ideal for having a go at getting drones through gates – and we’ll give you tips on how to get faster and be more precise,” says club president Nathan van Slooten.

Like any sport it takes skill and practice to finesse, requires specialist equipment, and rivals compete for titles and glory.

“They’re pretty quick – they have a top speed of 160kmh when going in a straight line and you’re still pushing 100km/h around corners,” says Nathan. 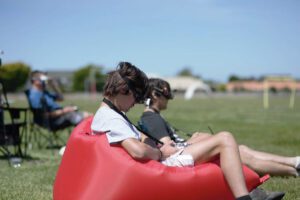 “Crashes are a part of it – if you’re not crashing, you’re not pushing yourself hard enough. Of course you’re not intending to crash but you’re always pushing to go faster and faster. It’s a good thing that most of us build our own because that makes it easier to sort them out.”

The Christchurch club formed in 2016 – about a year after drone racing emerged as a sport globally – and it’s growing in popularity as technology improves and drones become more affordable.

“The drones we use are different to usual ones – they’re built for speed and for flying around courses. This means that most of the drones used in our club are built by the people flying them.”

Those without their own racing drone can even use the club’s drone racing simulator to get a near-real experience. 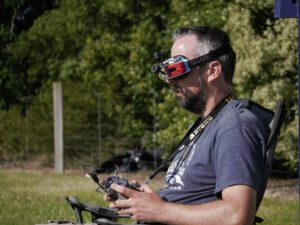 “The simulator is pretty much like the real thing and is a great way to see if you like it,” says Nathan.

Club members meet regularly at the site to practice and every few months an event is held to encourage more people to try the sport. The club’s twilight racing season is just finishing up for the summer, and in November night flying – where LED lights were attached to the gates – was trialled.

“Night flying hadn’t been done in New Zealand before and overall it was a great success,” says Nathan.

East x East is a collaboration between LINZ and Life in Vacant Spaces, located on nine hectares of red zone land. As landowner of this Crown-owned red zone land, LINZ considers short-term leases and licences to use the area for up to six months and since 2016 has facilitated more than 2800 transitional land uses, including about 150 short-term projects and events. 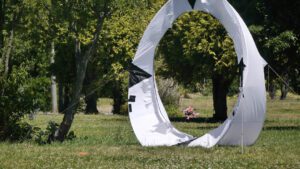