The story of how Alasdair Cassels took a rundown 19th century tannery and transformed it into a premium shopping and dining destination is almost as iconic Christchurch as the set of buildings that collectively make up The Tannery in the figurative and literal heart of an industrial suburb. But it’s The Tannery’s beer brewing operation which is putting Woolston on the international map. 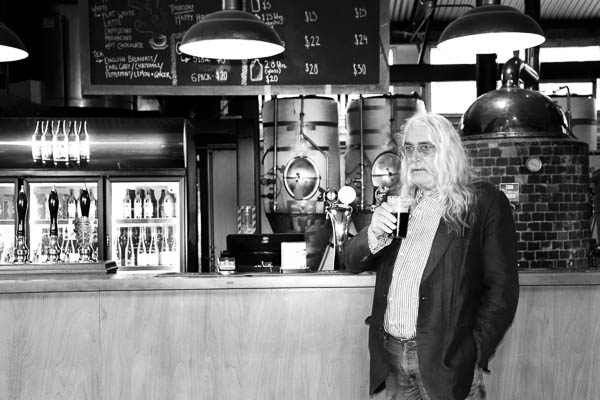 Cassels was born in Northern Ireland, moving to New Zealand in 1958. After studying engineering at the University of Canterbury, he headed several maintenance, sandblasting and engineering firms before making the move into property.

In 1994 he bought the historic tannery site – the loosely triangular site bounded by Garlands Road, Maunsell Street, Tanner Street and Cumnor Terrace that dates back to about 1874. For Cassels, it was love at first ‘site’.

He also had an interest in beer brewing, a hobby he’d been dabbling in for 45 years, since back when Guinness was “the gold standard of stout”.

“I wanted to drink something better than what was available in the bar,” Cassels says.

“There were really only two or three breweries around at the time and I always thought it was possible to get more taste into the beer.”

During a holiday at the family bach in the Marlborough Sounds, he started to pass his love on to his son Zak and son-in-law Joe Shanks. Despite blowing up the coffee grinder they were grinding the malt in several times, the resulting lager was “beautiful, really beautiful”.

It inspired the family to take it further and in 2009, Cassels & Sons Brewing Company was born. Their beers were an instant hit with local outlets and growth was swift. Then the 22 February earthquake hit. “We lost all our customers,” Cassels says.

Perhaps what is one of the most compelling points of the Cassels & Sons story is that despite the devastating quake destroying Cassels’ Sumner house, Joe’s Lyttleton house and the original Cassels & Sons brewery, just four months later the trio opened The Brewery at The Tannery site, in a corner building that was initially pegged for demolition.

And those beers? They’re no longer just a hit with the locals. Forty-five years after Alasdair started dabbling in brewing, he’s pushed Guinness of its pedestal to take out the top honours in the ‘Best Stout and Porter’ category at the World Beer Awards for 2019 with the Cassels & Sons milk stout.

More than 3500 beers from more than 50 countries entered the prestigious 2019 awards, where judges described the winning drop as, ‘Sooth milk chocolate on the nose; slight pear drop vanilla aroma as well. The body is smooth with rich dark malt flavours. Firm and well rounded. Good beer’.

While stout features a distinctive bitterness, milk stout is sweetened by lactose – a form of sugar derived from milk.

“It’s quite a complex mix of malt and barley,” Cassels says of the top drop.

“There’s not a lot of hops in it. When you drink it, you can taste espresso coffee and chocolate. It does all sorts of strange things to your taste buds.

“We can’t keep up with demand!”

Suffice to say, the brewery is no longer grinding malt in a coffee grinder. Production has already outgrown The Brewery and moved to a new facility in a nearby building. This year they’ve had to buy six more tanks to meet demand. That demand is already global. The brewery is already exporting containers of beer to China, the UK and Europe, something Alasdair looks forward to continuing and to growing.

It’s been said that a successful man is one who can lay a firm foundation with the bricks others have thrown at him and the saying is particularly pertinent when it comes to The Tannery.

Cassels quite famously rescued all the brick buildings on site. Despite the fact that it would have been cheaper – and certainly less labour intensive – to demolish and start from scratch, Cassels had 150,000 individual bricks removed from the buildings to make way for an up-to-code structural wall, before they were laid back on top.

But then the same can be said of beer brewing and of rebuilding; good things take time.

“I always wanted the brewery to be internationally recognised. This has put us well on the way,” Cassels says.