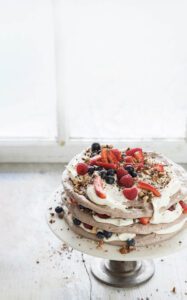 To make the meringue nut layer, place the roasted almonds in a food processor and pulse until they are ground, and resemble breadcrumbs. Set aside. Using an electric mixer, whisk the egg whites until soft peaks form, then slowly add the icing sugar one tablespoon at a time, while continuing to whisk. Whisk for 10 minutes or until stiff and glossy. Using a spatula, fold in the vinegar, cocoa powder and the ground almonds. Use the spatula to spread the meringue inside the outlines you’ve traced, smoothing out to the edges. Bake for 45 minutes or until the discs are crisp to the touch. Place on a wire rack to cool completely. 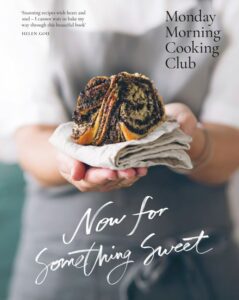 Recipe extracted from Now for Something Sweet by the Monday Morning Cooking Club. HarperCollins. RRP $55