Oonagh Browne’s love affair with chocolate has been more rich, intense and satisfying than for most. In fact, she says, it saved her life. We catch up with the queen of chocolate about why she believes eight cacao beans a day keeps the doctor away. 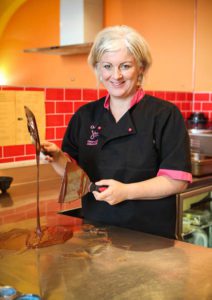 Irish-born Oonagh had been climbing the corporate ladder in London after completing a business degree when her boss gave her “the greatest gift”.

“He told me that I would get to the top rung of that corporate ladder,” she explains.

Already unhappy in the corporate world, the conversation provided a moment of clarity and she realised reaching the top wouldn’t bring her any satisfaction.

Within nine months she had packed it in to travel.

Eventually ending up in Australia, she began training to be a yoga teacher. It was during her time here that she met Suzanne Johnson and Bernie Prior who would later open She Universe, the idyllic café perched at the top of Governors Bay.

It was when Oonagh decided to make chocolate for a charity event that she discovered an innate gift for the confection.

“It’s like some people who have this innate talent for painting,” she says. “I found that in chocolate. I fell in love.”

When Oonagh’s then-husband Declan suggested they move to Christchurch to help Suzanne and Bernie run She Café, the couple made a new home here, but their work in the café wasn’t to be, with a fire destroying it just three weeks after they arrived. It would remain closed for nine months.

So instead they started selling Oonagh’s chocolate creations at the Lyttelton Farmers’ Market, her Decadent Date chocolate and hot chocolate were instant hits with the locals.

When the rebuilt café opened, it was Oonagh’s creative chocolate flair that helped She Universe become a local Canterbury icon. 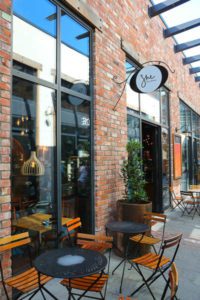 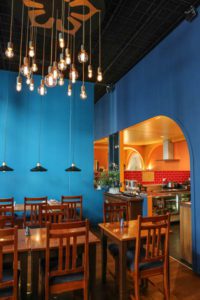 With the chocolate winning numerous awards, it was soon being supplied to outlets throughout the country and is now celebrating a move from Governors Bay to the new She Chocolaterie at Riverside Markets this year.

Post-quake though, Oonagh experienced severe depression or a ‘mental breakdown’.

“I was in the darkest place and nothing could help me, not even the support of amazing, wise friends,” she says.

Willing to try just about anything, she started researching natural antidepressants when she discovered cacao; the purest form of the very chocolate she was already in love with.

She vowed to have a cacao smoothie every day, combining it with another superfood maca which, combined with cacao, create a powerful antidepressant.

“I started to delve into the health side of cacao and spend time on a cacao farm owned by a friend in Samoa. It was a profound experience as I discovered my depth of connection with this food. Cacao is one of the oldest foods, with the ability to heal our bodies and support us on so many levels.”

Cacao’s health properties are well-supported by science, with the powerful little bean not only packed with nutrients such as iron, magnesium and zinc, but also antioxidants for heart health and neurotransmitters which contribute to wellbeing and happiness. For Oonagh, it’s a daily medicine she swears by. “Eight cacao beans a day keeps the doctor away!”

Oonagh’s work in Samoa has expanded to Peru and the Solomon Islands, where she is endeavouring to reverse the damaging effect of global demand for chocolate for cacao farmers.

Since the commodification of chocolate, large companies have continued to drive the price of beans down, with the supply chain leaving many cacao farmers impoverished, despite hard labour.

The knowledge of cacao’s medicinal value has been lost, even to those who farm it and it’s no longer viable to be a cacao farmer, so young people are no longer staying on their farms.

Oonagh is putting heart and soul into getting infrastructure and training into these regions, enabling the farmers to earn more and encouraging young people to become cacao farmers.

One of the greatest impacts is teaching the farmers how to enjoy the bean themselves, creating cookbooks with recipes and teaching them how to make tea from cacao bean husks (known as Skinny Tea in the Solomons due to its ability to encourage weightloss) and even cacao face masks.

“We want to connect the consumer and cacao farmer and close the gap, and for the cacao farmer, more than anything, to be empowered and proud of what they grow, but first they need to be earning a real income.

“Cacao was once honoured and revered, then we added sugar and it became something different; its time as a powerful medicine was forgotten, but now we’re experiencing a revolution; a cacao revolution.”

“I want people to know it’s the food of the gods.”