Comedic minstrel Tim Minchin is set to raise the roof at the Christchurch Town Hall on Friday June 25 with his special brand of entertainment. A singing satirist, Minchin is widely known for his unique style, blending comedy, acting and singing into a lively performance, using all his own material. 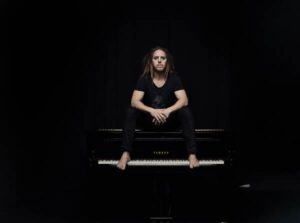 English born and Australian raised, Minchin started touring New Zealand in 2019, until the Covid-19 pandemic knocked it on the head.

“This is the encore to that tour. and I’m especially thrilled to be coming to Christchurch. I hear a lot about it from others, about the rebuild, the amenities such as the town hall, and the people.

“My hope is that people in Christchurch are just as excited to come and see and hear me, to laugh and cry, and enjoy.”

Minchin is not your standard frontman. He talks a lot more than the average musician, sings his own songs, recites his own poetry and opens up about life in the real world.

The 2019 tour was his first for eight years, before which time he dedicated himself more to song writing, composing music and stage shows such as the 2010 hit Matilda the Musical for which he wrote the music and lyrics.

“In the old days, I would write about my anxieties, about what frustrated me,” he says. “Now it’s tending to be about more slice of life, songs about what happens around me, about cheese, public shaming, critical rather than political statements.”

He still includes some of his old comedy favourites in his shows, but now also new songs that he describes as “heavy” and that tell a story. “There’s quite a few songs off my new album, some angrier than usual.”

He describes his act as a “funny cabaret show” and sees himself primarily as a musician and songwriter as opposed to a comedian. “My songs just happen to be funny.”

Explaining the ethos behind his singular style, he previously said: “I’m a good musician for a comedian and I’m a good comedian for a musician but if I had to do any of them in isolation I dunno!”

On stage he cuts a distinctive figure, typically barefoot with wild hair and heavy eye makeup, often juxtaposed with a suit and tails, and a grand piano. Shedding his footwear makes him feel more comfortable, while his eye make-up helps to emphasise his features, gestures and expressions to audiences.

Much of his look and persona is about “treading that line between mocking yourself and wanting to be an iconic figure. Mocking the ridiculousness and completely unrealistic dream of being an iconic figure.”