Sumner psychologist Julie Zarifeh has suffered immense loss, losing her husband and son in the space of two weeks. Her new book traverses the subject of grief, as Julie herself traversed the famed Pyrenees trail Camino de Santiago, the New York marathon, falling in love, getting engaged and becoming a grandmother. 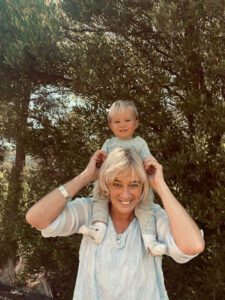 Grief on the Run has recently hit bookshelves and Julie hopes her story will be of some help to those who are grieving. The Zarifehs were living the good life. Their foundation was a strong and loving family, a wide circle of friends, a zest for a life of sport and travel, and successful careers.

Julie is a clinical psychologist and her late husband, Paul, was one of the founders of the well-known Christchurch wetsuit company Seventhwave.

Paul died from cancer in November 2017, aged 60. While he was dying, Julie knew that after 30 years together, she had to prepare for a very different life, as a single woman. She formulated a plan to walk the Camino de Santiago, and became involved with the documentary film project Camino Skies.

Then the unthinkable happened, Julie and Paul’s eldest son, 27-year-old Sam, was killed in a rafting accident on the West Coast in December 2017.

She knew she had to keep going, to keep a routine, to keep up her exercise and to keep planning for the future. Julie’s routines evolved into what she dubbed, “Big Hairy Goals.” Pressing ahead with the Camino de Santiago trail was one of them.

“I had to have something to look forward to. The community in which I live is amazingly supportive, but there’s also not many secrets in Sumner. I just intuitively knew I wanted to take the intensity of my grief offshore and take some downtime to process that.”

Her approach is what is known as active grieving. So, 2018 saw her also run the New York Marathon and get involved in several fundraising events for charities – ones with an active and fitness element, of course.

Today, Julie says she finds enormous solace visualising Paul and Sam being together.

“Sitting on a log on a beach having beersies, whatever. Most of the time I grieve collectively for them, but then my grief for Sam will hit on its own quite often. Just for the loss of a life that was yet to be fully lived.”

She’s still throwing herself headlong into her exercise and work, she’s part of a research team working with the families and victims of the Christchurch mosque attacks. She has also fallen in love, and is engaged.

The overall message of Grief on the Run is one of hope in the face of devastating loss. Julie’s been signing her book with the St Augustine quote, “Solvitur ambulando” (it is all solved by walking), saying walking is a great tonic for the soul.

Julie experienced another life-enhancing event recently when her son Jared and his partner Emma told her she was going to be a grandmother.

“The world just,” she clicks her fingers, “changed that day. It was very exciting. The month that Quinn was born was two years after our loss.

“But don’t call me grandma! The grandkids will call me Jazzy!”

And grand-baby number two is on the way. 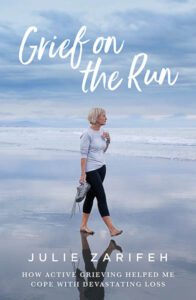