Many innovative projects are making Christchurch an exciting place to be – the latest is the addition of hundreds of electronic scooters gracing the streets. 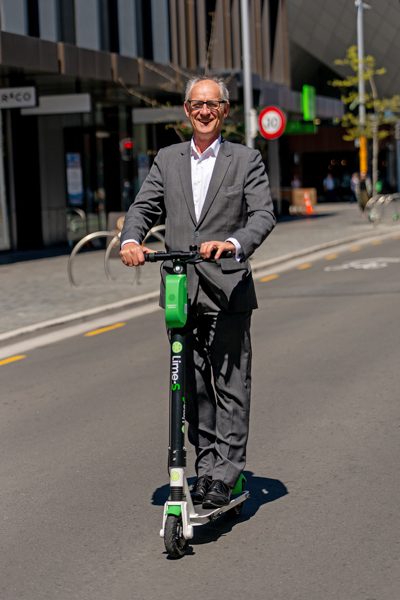 By now you have probably seen the black, white and (lime) green scooters. Stroll from South City to Cathedral Square and you will see smiling riders zipping in and out of traffic. The scooters can also be ridden from Halswell to Redwood, Sumner to Hornby.
American based Lime is the company behind the scooters and operates in more than 80 places around the world, claiming its network of electric bikes, electric scooters and pedal bikes have provided more than six million rides.

The Christchurch operation and a similar one in Auckland launched on October 15 with local contractors collecting, charging, and re-distributing the scooters each day. Using one is simple. Download and set up the Lime App, scan the QR code and off you go.
Follow the usual traffic laws, use some common sense as to safety – scooters can be ridden on the road and footpaths, and a helmet is recommended but not compulsory.

Each scooter has a range of about 50-60 kilometres and a top speed of 27 kmh. Unlocked for a dollar and .30c per minute, you are scooting for less than $20 per hour. “They’re fantastic!” says one CBD rider. The scooters are an efficient, fun alternative mode to make that appointment down town, whether it’s two blocks or two kilometres, or across the city if you are more daring.