The borders might be closed, but that isn’t stopping one the world’s most famous and influential artists setting up shop in Christchurch. He may no longer be alive, but Vincent van Gogh’s work will be resurrected in a multi-sensory event.

Van Gogh Alive has received rave reviews from around the world, as the artist’s timeless masterpiece are projected onto every surface of an exhibition space – taking viewers quite literally inside the artist’s work.

An evocative classical music score adds even more atmosphere to the event, which showcases thousands of the Dutch artist’s post-impressionist landscapes, still lifes, portraits and self-portraits.

Christchurch is just one of three New Zealand cities to host the event which has been highly acclaimed the world over, receiving kudos from The Guardian, The Sydney Morning Herald, Forbes, and others during tours of Shanghai, Rome, Dubai, Paris and many more.

While much of the world remains in lockdown, not only are local art lovers lucky to attend any public event – but they can also see the European cities which inspired Van Gogh, through his eyes. 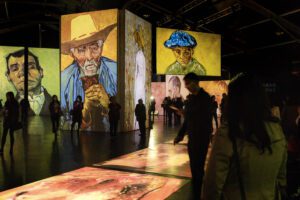 Created by Australian Bruce Peterson, the idea came around when he was living in Europe and taking his children to incredible museums, only for them to get bored five minutes in.

Van Gogh Alive has been created to engage audiences of all ages and all levels of interest in art.

Works on display include The Starry Night, his vivid nightscape of the sky from his bedroom in an asylum; a collection of self-portraits; Irises, and many more.

The exhibition includes those inspired by his time spent in Netherlands, Arles, Saint Rémy and Auvers-sur-Oise.

Live Nation New Zealand Managing Director Mark Kneebone says the event is for all ages, and has been set-up to allow for contact-free and socially distanced viewing.

“Over six million people around the world have experienced this incredible immersive experience, including sold out seasons across Australia. We can’t wait to share the magic of Van Gogh with Kiwis in 2021.”

On now until March 19 at the Air Force Museum of New Zealand, Wigram. Buy tickets at www.ticketmaster.co.nz.