February always represents plenty of amazing events happening in the city and Cantabrians are gearing up for one of the hottest events of the year – the Lexus Urban Polo, coming to Hagley Park, Saturday 29 February! 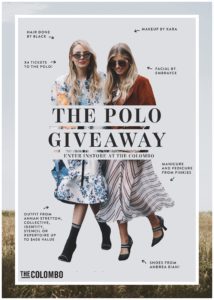 The Colombo is giving its shoppers the ultimate polo experience whereby one lucky winner and three friends receive complimentary tickets to the polo, an outfit worth $400 from any of The Colombo stores, shoes, a facial treatment, a manicure and pedicure, hair and makeup.

As for any special occasion, people love having the opportunity to dress to the nines, but it’s important to make time to fit in some necessary grooming appointments before the big day to ensure you look as fabulous as you feel.

Book ahead in salons such as Pinkies or Embrayce Beauty & MediSpa which offer a Microdermaplaning facial and the Power of Three facial – the latter being a fabulous treatment that includes LED Light Therapy, Laser Skin Rejuvenation and Active Vitamin Infusion with Sonophoresis.

Next step – your polo ensemble! For effortless elegance, tops and trousers from The Collective and Repertoire are of a luxurious drape and look sensational.

Heels and wedges from Andrea Biani will show off those pedicures and nothing beats a statement clutch from Redcurrent.

Annah Stretton does verve and vibrancy like nobody else, while those who prefer the casual but cool approach will find plenty of inspiration at Stencil.

Rendezvous with friends at The Belgian Beer Café Torenhof, head to the Beer Library for your favourite pre-polo tipple or kick back with a coffee from Underground Café Colombo.

Bring your enthusiasm to the game; cheer the players and clap every victory, as fan interaction is encouraged, but do be mindful of the ponies that can be easily spooked by spectator over-exuberance however well meant. Always stay alert for stray balls, mallets and horses.

Whatever occasion is marked on your calendar for February, be it a party, a wedding, a special Valentine’s Day celebration, or the polo, make sure you look your best and stand out from the rest in something stunning from any of the beautiful stores at The Colombo. They look forward to meeting you.

A day at the office can mean interviewing gang members or quizzing politicians for young journalist Katie Harris, one of the city’s newest super sleuths. 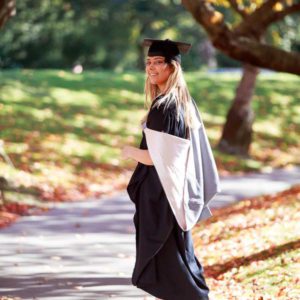 Katie, who grew up in Hillsborough, Christchurch, has just won the DW Bain Prize as the top student in the University of Canterbury (UC) Postgraduate Diploma of Journalism class.

She first broke a story about the first all-female chapter of Waikato’s Mongrel Mob Kingdom while she was still a student.

“She stood out early for her curiosity, drive and hunger for news. She was unafraid of tackling hard stories and, I don’t doubt, can go far in journalism.”

Katie has already found work as a journalist for New Zealand Media and Entertainment (NZME) at Newstalk ZB in Wellington, and this month she is travelling to Jakarta, Indonesia to work for six weeks after being awarded a media internship through the Asia New Zealand Foundation.

“I knew I wanted to be a journalist as soon as I started studying Media Communications at UC,” she says.

“I don’t know what other job I could do because I think I would get bored. This job is always changing and it’s always exciting. It’s definitely a tough industry but it’s good.”

Katie is drawn to “hard news” and first made contacts with Mongrel Mob Kingdom members from Hamilton when they came to UC to give a lecture to Criminal Justice Programme students in September 2019.

“I was never really an academic person before but I feel like I’ve found my niche and it shows anyone can succeed at what they do if they find something they’re passionate about and they work hard.”

Her dream is to one day work as a foreign correspondent and, with that in mind, she has been learning Arabic in the hope that she might one day be based in the Middle East.

She spent a month in the Czech Republic in August 2018 studying a paper in foreign correspondence journalism.

The adventurous young woman is also a keen surfer and she edited a youth magazine launched earlier this year called Yo, Vocal.